CRE Tech Adoption is Skyrocketing - Don’t Get Left Behind

Written by Northspyre Posted on February 11, 2021 Leave a comment

Revolutions don’t happen all at once. The PropTech and CREtech industries have been building their revolution for years, supported by billions of dollars in venture capital investment annually. The funding signaled a bright future for CRE technology—but there was an essential missing piece: technology adoption. That changed in 2020 when the pandemic compelled - and in many ways required - commercial real estate owners and developers to evolve and adopt new technologies.

To be sure, technology adoption has been growing for years. CRE stakeholders have acknowledged the benefits of CRE technology, but change was coming slowly. In 2019, Deloitte’s annual survey declared that technology had “permeated every aspect of the CRE business,” but it quickly added that adoption was moving at a “relatively slow pace compared to some other industries.” This dynamic finally broke last year when owners, operators and developers crammed years worth of adoption into 12 months.

Accelerated technology adoption is now launching the PropTech industry into its next phase of growth. In 2021, the PropTech sector will be marked by three industry-defining trends—the rapid adoption of purpose-built technology, corporate strategies to scale technology programs and renewed VC investment activity.

Inside the Purpose-Built Technologies CRE Owners and Developers Are Embracing

Early surveys are already revealing an increased appetite for new technologies. A global survey from EY and CRETech found that only 4% of CRE companies are not thinking about technology adoption and integration, while 61% of companies have already adopted technology and nearly a third of respondents are integrating multiple technology solutions.

So, where is all of this investment going? Data analytics has been identified as the single most important tool. The EY survey reported that a staggering 92% of companies are planning or currently focused on adoption and integration of data analytics tools, and Deloitte’s survey found cloud, robotic process automation, artificial intelligence and digital channels will be the most adopted technologies over the next year.

Construction tech is also expected to see new growth. John Helm, a general partner with Camber Creek, is most bullish on construction technologies in 2021. “We had never doubted the long-term opportunity for construction tech; due to present conditions, it now seems like a strong category in the short and medium-term, as well,” said Helm in a recent interview with Forbes.

Institutional investors are continuing to take the lead on technology adoption, but many are now forming strategic partnerships with the purveyors of these technologies to drive further growth. More than half of REITs reported plans to form strategic partnerships, and 45% of developers made the same claim. These partnerships are likely to play a significant role in the evolution of technology and generate more adoption down the ladder among smaller and even mom-and-pop companies that have less risk tolerance to invest substantial capital in new technologies.

Why CRE Stakeholders Are Investing in a Longer-term Tech Strategy

The rise in CRE tech adoption wasn’t driven merely by a necessity to survive a period of social distancing during the pandemic or as a way to cope with remote work. Instead, there was a fundamental shift in perspective.

Many CRE companies found they were vulnerable to a rapid market dislocation, like the one we saw last year, without a scalable technology program. In a survey conducted by Deloitte, 82% of companies said that the pandemic exposed shortcomings in technology infrastructure, with 95% of respondents looking to improve internal technology capabilities.

These realizations have given way to a rise in the adoption of long-term internal technology strategies. Deloitte makes the recommendation, as does a EY, and many companies are following suit. Research from EY found that 69% of companies have prioritized technology strategy on their agenda.

A tactical plan is essential for most technology programs. The EY survey found that 82% of commercial real estate companies are utilizing externally created technology solutions, rather than developing internal proprietary tools. Creating a strategy will not only help these companies assess and integrate multiple technologies into a single platform, but it will also ensure companies thoughtfully adopt the best technologies to achieve long-term business goals and improve efficiency.

At present, 53% of CRE companies in North America have already adopted a tech strategy, according to a survey from Deloitte, and an additional 32% of companies have gone so far as to adapt business strategy and job descriptions to better align with technology adoption. Still, nearly half of companies are not thinking strategically about technology adoption, and the EY survey found that 58% of companies complain that new technologies don’t easily integrate into the existing business or technology infrastructure.

This is why an internal tech strategy has become so vital. An effective strategy moves beyond mere technology selection. It provides a roadmap for implementation, ownership and governance, and targets technologies that can deliver value. To accomplish these goals - which can be lofty for the non-tech adept - companies should leverage internal and external expertise from data scientists, IT specialists and change management experts to help develop a strategy that addresses the company’s unique needs.

Technology adoption is critical, but it is only one-half of the coin. Sustained growth must include both demand—tech adoption from CRE owners and developers—and supply—available technologies. The latter requires sustained capital infusion for development. But, just as the pandemic delivered a welcome acceleration in tech adoption, the economic dislocation stunted venture capital funding in PropTech start-ups.

Last year, VCs invested nearly $24 billion in PropTech companies globally, a 25% decrease from 2019, according to research from CRETI. Nearly one-third of that activity took place in the first three months of the year, before the onset of the pandemic. This was a dramatic turnaround. From 2015 to 2019, VC investment in CRE tech quadrupled according to some sources, while others report growth as high as 1,072% over the same time period.

It’s worth noting that global real estate investment decreased 36% in 2020, making the drop in CRE tech investment rather nominal by comparison. Tech investment began to rebound at the end of the year with the five of the largest deals of 2020 closing in November and December. Logistics and services company REEF Technology led the end-of-the-year funding surge when it secured $700 million in November 2020. Creditas followed with $225 million in funding. Better.com secured $200 million, LendingHome received $75 million in December and car sharing platform Envoy Technologies rounded out the list with $70 million in funding.

This makes a good case for a resurgence in VC funding, and early activity is supporting the outlook. Already, there has been a handful of encouraging tech deals this year, including apartment rental start-up The Landing securing $100 million in funding.

It turns out the true disruptor was the pandemic. 2020 set the future of CREtech in stone, and the rapid acceleration of strategic technology adoption and a corporate commitment to scale technology infrastructure promises to drive advancement for years to come. Owners and developers that invested in technology solutions, namely data analytics, automation and artificial intelligence, found success this year, whereas those that didn’t, fell behind. For most, the choice is an easy one.

Ready to join the revolution and transform the way you deliver CRE projects with automation, data analytics and artificial intelligence? Upgrade with Northspyre. 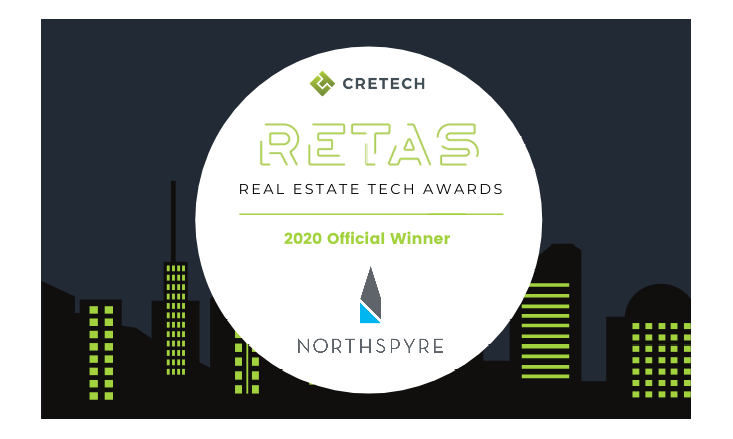